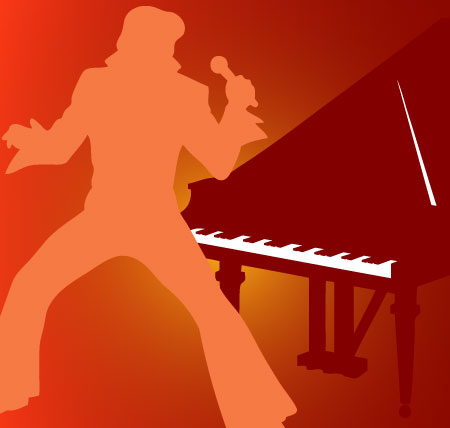 In 1957 Summerfield (a fictional mid-Western college town) Elinor Marigold, an idealistic piano teacher, is addressing the local music teachers association as their newly elected president.
1.Now is the time for art (ELINOR)

Her nephew Kendall Blake is also pursuing an artistic path as a drama major at the local college. He loves Shakespeare and hopes to make a career as an American Laurence Olivier, but his practical-minded girlfriend Rebecca Warner is dubious. She’s a budding feminist and economics major at the college, and thinks Kendall should aspire to be the next Marlon Brando instead.
2. Stella! (KENDALL)

Elinor encourages Kendall to continue with the classics, because “in twenty years’ time no one will have any idea who Marlon Brando is!” But her own roster of students is shrinking, since so many young people have been caught by the charms of rock and roll, including one of her best students, Alison Sheridan, whose boyfriend plays guitar.
3. Three chords (ALISON)

Kendall and Rebecca are about to go to the college’s movie night where they’re showing the documentary “Kon Tiki”. Kendall is self-conscious about being a drama major rather than something more macho. He feels like an outsider, but Rebecca provides perspective.
4. On the outside (REBECCA)

Alison’s widowed father Philip is attracted to Elinor, and embarrassed that Alison has decided to quit piano. He calls Elinor to apologize, then opens up a bit about his own life as a car dealer.
5. Fins and lights (PHILIP)

Elinor is worried about her finances and finds out about a contest for “the next rock and roll hit” which offers a big cash prize. A few weeks later Alison brings home a recording of the latest pop sensation. Kendall also enjoys the song, which he shares with Rebecca.
6. He got sneaky on Kon-Tiki (ALISON, KENDALL)

We see Elinor on the phone to a record company producer, explaining that “He Got Sneaky on Kon-Tiki” was written by her “husband”, a coal miner named “Rocky Jumper”. The producer wants another hit song like it. Elinor is horrified but agrees.
She, Philip, and Alison go to the latest Vincent Price horror movie, after which Elinor and Philip talk about their pasts and the world they live in now.
7. Scary but not too scary (PHILIP, ELINOR)

A few weeks later we see Kendall entertain Rebecca with another Rocky Jumper hit. Alison shares it with her father as well.
8. Ooh-la-la (KENDALL, ALISON)

Elinor explains to Kendall that she’d like him to take on an acting job. A record producer wants to come to Summerfield and meet someone she made up. Can Kendall play this nonexistent person? Puzzled, Kendall asks, “Who?”. “Rocky Jumper”, Elinor confesses. Kendall stares blankly at her, then the light dawns. “YOU?”
But soon there’s big musical news: A handsome young Texan named Van Cliburn has just won an important piano competition in Soviet Russia, which encourages more students –including several boys — to sign up for lessons with Elinor. Not only that, Alison has resumed her piano lessons (she wants to meet Van Cliburn), Kendall has been hired by a summer theater to act in Shakespeare, Philip has been named “Salesman of the year”, and Rebecca has landed an internship at his office. Everyone is happy.
9. Ode to Van Cliburn (COMPANY)

But enthusiasm for Cliburn soon peaks and passes, and the summer theater does not materialize. Elinor and Kendall need purpose in life.
10. I need a vacation (ELINOR, KENDALL)

Alison breaks up with her boyfriend and Rebecca tries to give her some advice.
11. Smart but not too (REBECCA)

Rebecca, always ready with advice, encourages Philip to pursue Elinor now that he’s “in the market”.
12. In the market (PHILIP)

Elinor decides to go back into rock and roll, and explains to Kendall that as a college music major she learned to copy many different styles for her music theory assignments. Rock and roll novelty songs are just another style. She and Kendall perform her latest for the others, who are stunned at first.
13. Mister Sputnik (COMPANY)

Rebecca volunteers to be “Rocky Jumper”’s manager, but insists that Elinor give up the phony name and persona. Elinor agrees, almost relieved, as she questions her sense of self.
14 – To thine own self (ELINOR)

Kendall has decided to audition for a role on a TV soap opera. Even though he’s sure he won’t get the part, he also questions his own commitment to more serious work.
15 – To thine own reprise (KENDALL)

Before she can send “Mister Sputnik” to the record company, Elinor is informed that novelty songs are out and folk music is in, and unless she wants to move to New York or Nashville and commit herself to a fulltime career as a pop songwriter, the producer is no longer interested.
Three years later, Elinor and Philip are married, Alison is a college music major, Kendall has become a soap opera star, Rebecca has taken a faculty position at the college (and married someone else). Classical music is on the rise in Summerfield and across the country. Elinor has been re-elected as president of the music teachers association, and the others support her renewed conviction in the importance of art.
16. Now is the Reprise (COMPANY)