A musical about the famous, trend-setting 1910’s dancers Vernon and Irene Castle, and Hollywood in the 1930’s.

In 1938 RKO Studios filmed “The Story of Vernon and Irene Castle” starring Fred Astaire and Ginger Rogers. Irene Castle herself was hired as technical advisor on the film, and, according to reports, was not entirely happy with the project. CASTLE WALK imagines a conference between her and the film’s director, H.C. Potter, during which she strives to set the record straight, while reliving her professional and personal life with Vernon (who was killed in WWI). 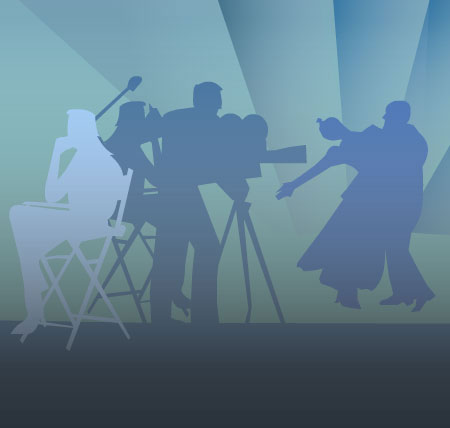 Irene sings to Vernon’s memory about her excitement that their life story is to be filmed. IRENE: Judy McLane

Vernon Castle, appearing to Irene in a memory sequence, re-enacts their triumphant appearance at the Café de Paris in 1912 Vernon: Ted Keegan

Irene remembers her days in Paris when she and Vernon were not yet famous.
Young Irene: Jennifer Mackenzie Dunne
Vernon: Ted Keegan

Walter Ash, Vernon and Irene’s friend/servant who has accompanied them to Paris, has won a lot of money in a pick-up poker game. Now they can eat – and celebrate.
Vernon: Ted Keegan
Young Irene: Jennifer Mackenzie Dunne
Walter: Ken Prymus

Irene describes to H.C. what dancing with Vernon was like.
Irene: Judy McLane

Irene points out that, while her performances with Vernon are lost forever, the Astaire-Rogers movies can be seen over and over again.
Irene: Judy McLane

Walter Ash has died by the time the RKO movie is made, but Irene can still hear his advice.
Walter: David Jackson

“Castle Walk” was their signature dance, although this is a new song, not the original number by bandleader James Europe.
Young Irene: Rebecca Robbins

Irene has been asked to leave the studio set. She imagines Vernon singing to her from beyond the grave.
Vernon: Ted Keegan

The ghost of Vernon tries to tell Irene that nothing about this earthly life matters that much. Irene replies
Irene: Judy McLane